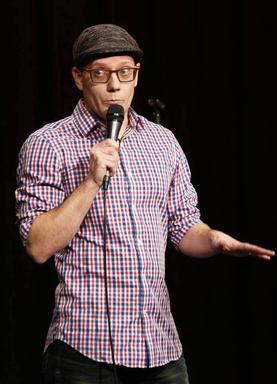 Steve Ausburne’s comedy career started with MC/Host work for friends with bands. His first attempt at actual stand up ended with him getting a lifetime ban from a church in Grant’s Pass, Oregon – so a pretty successful start.

Since then, Steve has embraced the stage as a place to present a spoken word memoir of all the embarrassing life moments that lurk in a place that only stand up or therapy sessions can reveal.

Basically, Steve has no shame.

​Steve peddles his comedic wares throughout Sonoma County and the San Francisco Bay Area.  He produces comedy shows throughout California's Wine Country and in addition to comedy performances, he is available for auctioneering, event hosting, work parties, voice acting, and private dancing.